A Blot on History – The Evolution of Ink

Home > Informative > A Blot on History – The Evolution of Ink

Ink is employed in a myriad of differing and diverse situations, yet it has a singular task – that of conveying information from entity to another without the need for either to meet. Ink has to have a wide range of attributes, modified to suit the circumstances, but for use has to be liquid or semi liquid enabling marks to be transferred to a surface. Ink has probably contributed more to the growth of civilisations across the globe than any other single thing. So, why is there such an astonishing breadth of prices for this humble liquid? Let us have a rummage around history to look for ink’s origins and development. We have to go back a long way, to around 400,000 BC suggested by the discovery of pigments and mixing tools in Zambia, although no images have come to light as yet. The oldest known images so far are cave paintings dated about 35000 BC using charcoal in the form of burnt sticks from the edges of their fires, and crushed twigs to use as primitive brushes for the clays and soils gathered from their surroundings. Ink, in a form we would recognise, probably originates from the time of the Egyptian Pharaohs, the Abyssinians and Mesopotamians when the first alphabets were created to replace pictorial images and collections of triangular marks in wax or clay tablets, which could be laid on papyrus rolls made by interweaving the flattened stalks of the papyrus reeds – the origin of the word ‘paper’.

As Civilisations developed, alphabets and languages expanded and increasing demands were made to keep track of businesses, shippers, the law and a myriad of other activities and at the forefront was the need for ink. There were many and varying mentions and recipes documented and recorded over the last two millennia, especially from the Mediaeval period and involve ingredients such as oak galls – for tannic acid, vitriol, sulphuric acid and iron sulphate to help create the pigment and wine or vinegar to speed the process.

Ink continued to be made in this complex way for centuries, right up to the middle of the 19th Century. In 1855 an 18 year old called William Henry Perkin was experimenting with a compound extracted from coal-tar called Aniline whilst trying to find a synthetic form of the anti-malarial drug, Quinine, vital for the survival of the traders across the British Empire where often malaria was rife. The precipitate he isolated dyed fabrics a rich deep purple which was far more resistant to fading than any other then known. These ‘Aniline’ dyes were the result of experiments with aniline to create a huge range of colours and hues, with the experience being transferred to ink makers. With the explosion in communications and more efficient transportation increases in literacy were Important to assist in the growth of commerce and the more efficient, and convenient fountain pen lead to the need for dye based inks which were non-clogging and free-flowing leading to major pen makers developing their own inks, with the urging of customers to use the inks supplied by pen makers. 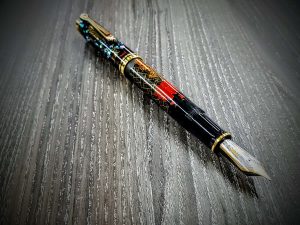 With the increasing expertise in manufacturing, the bettering of engineering tolerances and sophistication of materials, greater demands fell on the ink makers to ensure there were no particulates present that could compromise ink-flow, to give the ink lubricating properties especially for the pen nib, as paper is a particularly abrasive substance, give the ink high resistance to fading in the presence of bright light (e.g. sunlight), to make the ink washable from clothes and fabrics, or to be a permanent as possible on paper, fabrics or vellum and parchment

Any one ink is unlikely to fulfil this brief list of properties, but Ink makers search for that unique ‘something’ that ink users search for. It can take several years to develop new ink, such as Diamine Shimmering ink, only time and customers will have the last word but the efforts involved in producing something special can be very demanding. I am an ink lover; I buy inks for a particular role, for an everyday use, for the sheer joy of the ink and the whisper of pen on paper and the creation that emerges on the paper. I love ink for its sheer diversity and the way it can communicate over and above just the words. Cost is secondary (my wife would probably disagree). As with many things, and pens and inks are no exception, purchases are often made on the basis of logo and are a triumph of marketing over substance, but, if you like the pen (yes, you…) then that is your decision. 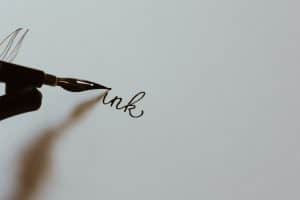 So, why does Ink cost so much? Probably because we are prepared (not willing) to pay for it, or there is no alternative (see Printer makers and printer cartridges)

If you are a dip-pen user then the only limit is your ability to innovate. As for me, a fountain pen user, I’m happy my writing costs less than ball pens 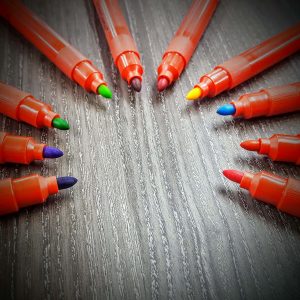